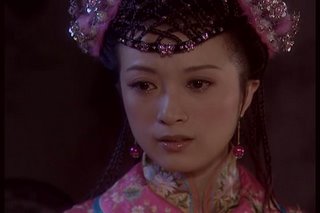 Last year while we were on outreach, Fifi and I discovered a long historical drama about Nurhaci, the hero that unified the warring Manchurian tribes and established an empire that eventually evolved into the Qing dynasty. The drama was based on true history but kinda twisted with romance and stuff like that. Among the fictional characters, my favorite one was the one called Naqiya (picture), playing one of the many Nurhaci's women...but was never married to him because he executed her father (his excuse for not wanting to marry her).

Anyway, recently I discovered the blog the actor that plays Naqiya and impressive to me, she is so down to earth just like any one of us, non public figures. She writes lots about her family, her work, her friends, and even posted candid shots of them.

So for the sake of it, I linked her blog to my site...to remember a favorite character from my most favorite historical based soap opera.