...like i said before, i will be a really cute bride. 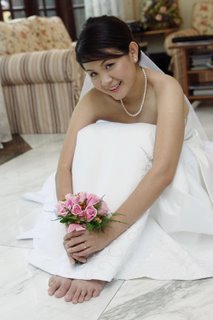 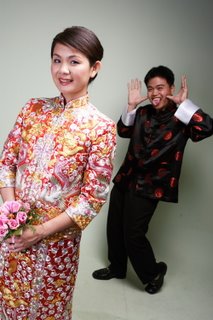 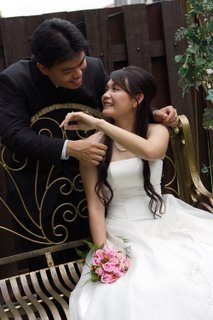 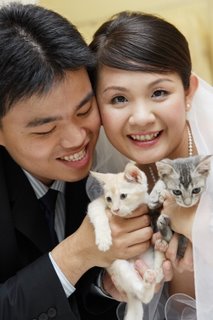 Itz the end of my very condensed week in Malaysia getting prepared for my big day. Here are some of the pictures we took throughout the week.

Food on the wedding banquet. 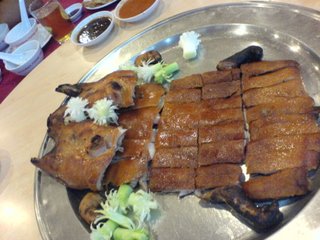 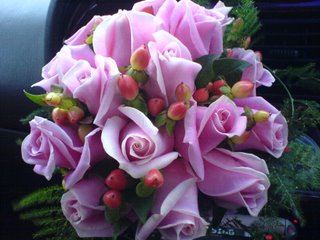 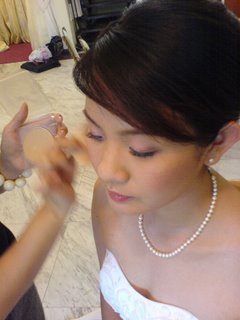 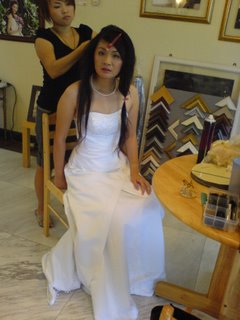 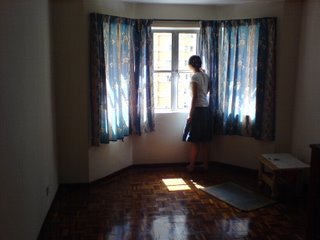 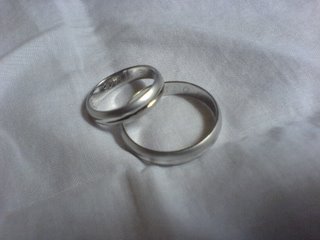 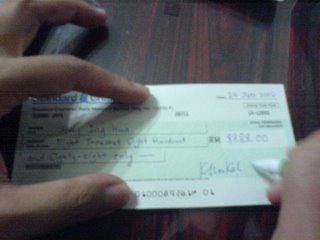 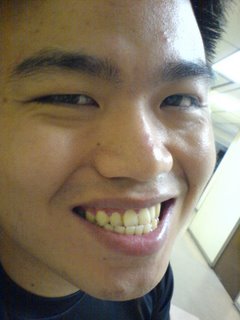 It was the first time I was asked to scan my luggages on the way out.

The first disturbing sight I saw was a Chinese woman trying to bribe the customs guy with RMBs...she speaks very little Malay and he understood no Mandarin. It seemed like he wasnt impressed...I couldnt tell if he were not happy with the amount she offered or just embarrassed because I was watching. If I werent busy trying to get my luggage which was bigger than myself off the conveyer belt, I would have taken out my camera and start snapping pictures. I was really mad!

KK came and picked me up. On the way to dinner, he took me sightseeing at Putra Jaya, the new administrative capital. I have to say that place is really impressive. For once, I am quite proud of the country.

We went to have street food because I ran out of ideas of what I feel like eating. Tofu fa and lok lok came up....delicious. It is nice to do fun things with a boyfriend. It has been years....

Today, we started off our day praying together. I met up with his dad and siblings at breakfast. Then we drove to the studio house to pick my dresses and to talk to our photographer. I am allowed two wedding gowns for the prewedding photo shoots and a traditional chinese wedding dress. Then we went to meet up with his mom and went for hi-tea at a really fancy cafe. After that his mom and sis helped me to find a pair of shoes for the photo shoot as I have no eyes or couldnt care less for those strappy stiletto fragile and sexy looking stuff..real sigh.

Suddenly I am back and present in this family again...after 3 years. How did it all happen? It was quite simple on my side. I simply told KK what God did in my life for the past 2 years and one thing led to another.
Posted by angeline at 7:46 PM 5 comments:

Here is Caryl, the Grand Pooba...
C for Courageous and strong-she survived 5 months with us!
A for Adventurous-she is willing to go "DEEP" into China and trek up the Great Wall in a lightning storm.
R for Really good at keeping her socks bright white and keeping us all in time during worship with her shaking egg.
Y for Young-the only YWAM leader in the world to have led over a dozen outreaches before the age of 17.
L for Loving-she shows the love of Christ to everyone she meets and regardless of the time, place, or how she is feeling, she will never fail to give you a hug that melts away your worries.

There is Keith, our Grandma...
K for Kool enough to let us call him Grandma even though he's a 21-year old guy with a beard.
E for Entertaining in every situation, especially when you feed him or if there is jiaozi in the room!
I for Incredibleat packing-the ONLY guy to be able to take no more than a day's worth of clothes on OR and make it last 2 months.
T for Talented at Chinese-even more talented at making them think that he knows what they're saying when he has no idea.
H for Hot...on fire for God-a real man after God's heart with a passion for the Hui people.

and Angel, who is blogging this...
A for Always provides entertainment with her cat-like ways (the way she purrrs her "Rs" and pounces for a snuggle.
N for Never fails to try to get us where we need to go, even though she has no idea how to get there.
G for Gorgeous-with her long, long flowing hair, especially when she wraps it around her head as a turban.
E for Extremely good at ignoring the Chinese paparazzi during OR even though she's got wicked awesome Chinese skills.
L for Leads-her words are few, but her heart speaks volumes, she really exemplifies that actions speak louder than words.

Now the students...
Bethany the Encourager,
B is our Encourager. She always looked for ways to encourage her team members through words, notes, gifts, and big hugs despite claiming to be a non touchy-feely person. God used her to speak truth into our lives. She is also a good leader, leading out during Bible studies, intercession and worship times.

Gena the Congenial,
Gena is our Miss Congeniality/Gullibility. She is really fun to hang out with because she is so easy-going. She is also very generous, often offering her snacks, belongings, service, and encouragement to her team mates. Gena was super sensitive to the well being of the team and always strived to maintain right relationships with everyone.

Liz the Caring,
Liz genuinely cares about people’s feelings. She noticed people when they were down and never hesitated to pray for them on the spot. She also has a big heart for the lost and prayed passionately for them. On top of that, she is a fun loving person and her laughter is contagious.

Joelle the Conscientious,
Joelle remembers details like no one else does. She is an attentive listener and her conscientiousness had been a precious gift to the team. Even though she’s quiet, she was not shy during evangelism times. She was always on the look out for opportunities to share the gospel. She brought the gospel puzzle with her everywhere she went!

Natalie the Worshipper,
Nothing, no one, no situation stops Natty from worshipping her God. Her life speaks volumes of her adoration of Him. Her intimacy with God and unreserved devotion to Him was a huge encouragement. She was also selfless, always reaching out and putting others before herself. She is a beauty inside and out.

Sophia the Good Listener,
Sophia has normal sized ears, but watching her you would think that they were enormous because of the way she loves people and is always willing to listen. She liked doing things behind the scene i.e. reaching out to people, praying for them, and not expecting anything in return.

Chad the Go Getter,
Chad is a diehard adventurer. He did not hold back anything...speaking Mandarin, trying “strange” food, meeting strangers, and most importantly, sharing Jesus. He was also an encourager. His jovial disposition and childlike temperament brought refreshment to weary souls.

Kevin the Evangelist,
Kevin was our dedicated evangelist. He loved telling people about God and he did it very well. He so earnestly desired the lost to know Christ that he would spend days off and free time with them. He was also faithfully walking in the confidence that God placed in him.

Jesse the Sensitive Spirit, and
Jesse is caring and sensitive to people’s feelings and needs. When someone was hurting, he hurt along with him. He was there to reach out to the team. He also loved to serve and always displayed a servant’s heart.

Sebastian the Faithful Servant.
Sebastian displays quiet strength and determination. Those around him knew they could count on him to give his best no matter what the task was. He was loyal, trustworthy and diligent. He also showed willingness to grow in new areas especially in personal evangelism.

DTS 2o06 is over.
Chad is already in Nebraska, planning to go to college in Omaha.
Joelle is leaving tonight, her 21st birthday's eve...needs to rush home to celebrate.
Natty got admitted to Graduate School doing Masters in Chinese Studies. She will be living in London.
Sophia finally decided to do FEET. She is flying home for a couple of weeks to say hi to mom.
Jesse is leaving but also coming back to HK for FEET and COR...according to the 'rumor', he is applying for DTS staffship.
B is coming back in August to be my roomate.
Sebastian is staying for SOFM. Small school....I bet he is thrilled.
Gena is going back to sweet California, so is Kevin..but he has to go visit Beijing with his parents first.
Liz is flying back home to sweet Texas.
Keith's friend is coming to visit him in HK. He has all their meals planned but have minimal ideas for sightseeing.
Caryl's going home to Omaha to visit Caryl, her mom.
and Angeline is going home and get legally married.
Posted by angeline at 9:27 AM 3 comments:

It started to make sense why I feel unangeline these days. My mood has been unstable since I got back from OR and I was not sure why I am this way. While I was sitting here talking to Faby, the light bulb came up. Re entry is rough and it does affect unemotional people sometimes.

Here is a collection of oracles that came up during OR.

1. Have a heart for the lost, not just a desire to be involved in missions. What is your real motive, Angeline? (CS)

2. One who denies god, denies his own humanity. (KM)

3. One who put his faith in science and its discoveries will never discover his purpose in life. (KM)

4. Build a relationship with an unbelieving friend, get to know the person enough that you can envision what kind of believer the person would be. (KM)

5. It is beneficial, even crucial that a new believer should own a good study bible. (KM)

6. Compare to eternal life which is the absolute reality, the difference in age in our present life is negligible. In the light of eternity, we are all considered infants. (LZ)